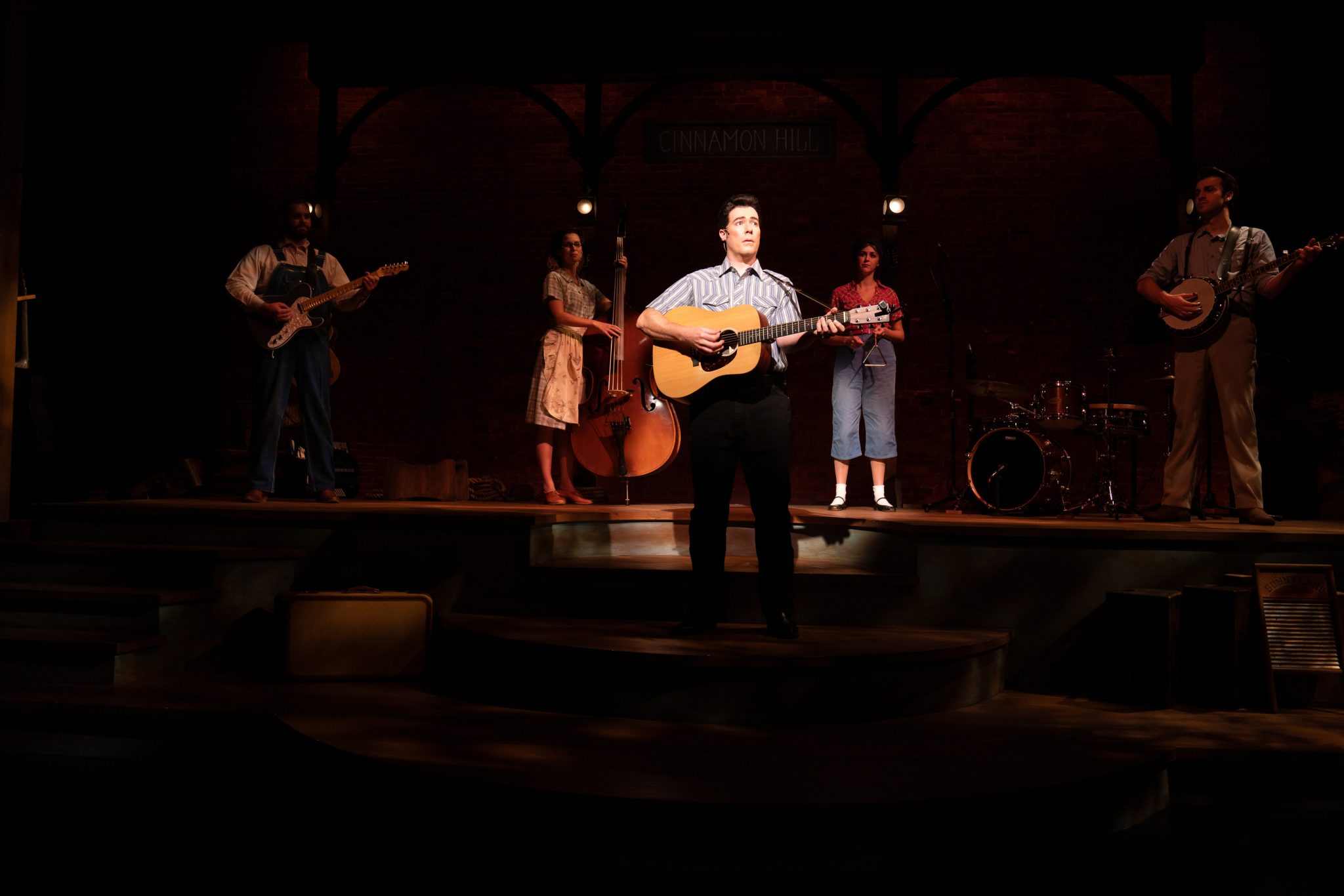 The Music of Johnny Cash

Masking Required for this production

From the songbook of Johnny Cash comes this unique musical about love and faith, struggle and success, rowdiness and redemption, and the healing power of home and family. More than two dozen classic hits — including “I Walk The Line,” “A Boy Named Sue,” “Folsom Prison Blues,” and the title tune — performed by a multi-talented cast, paint a musical portrait of The Man in Black that promises to be a foot-stompin’, crowd-pleasin’ salute to a unique musical legend! Though he is never impersonated, Johnny Cash’s remarkable life story is told through his music, climaxing in a concert that will both move and exhilarate!

Ben is so grateful to be in Maine working with both Maine State Music Theatre and Portland Stage. Hope made his Broadway debut in 2012 in the Tony Award winning musical ONCE. He developed an early passion for good music and storytelling through his upbringing in Birmingham, AL. Since receiving his BFA in Musical Theatre from the University of Central Florida, his passion has taken him around the world playing such notable musical greats as Hank Williams, Johnny Cash, Elvis Presley, George Jones, Woody Guthrie and Buddy Holly, among other more traditional musical theatre roles. In recent years Ben has also enjoyed stepping into the role of director and co-producer from time to time. Ben leads NYC-based Honky-Tonk band BEN HOPE & THE UPTOWN OUTFIT and has the pleasure of living a life full of music with his wonderful wife Katie Barton. Learn more about Ben and the band on their website, www.benhopemusic.com.  All of Ben’s music is available on iTunes and other digital music outlets.

A native of Georgia, Katie earned a degree in musical theatre at Birmingham-Southern College in Alabama. She then went on to acting apprenticeships at Flat Rock Playhouse and Actors Theatre of Louisville. In the years since she’s been working professionally in theaters all over the country as well as a Broadway National Tour, an international tour, a brief stint in Las Vegas, and a few commercials. She currently lives in Sparta, NJ with her husband Ben Hope, who brings laughter and spontaneity to her life everyday. Some of her favorite past roles include: Dyanne – MILLION DOLLAR QUARTET (Broadway National Tour, Las Vegas, Norwegian Getaway), Tammy Wynette in STAND BY YOUR MAN, June Carter Cash in RING OF FIRE, Audrey Williams in HANK WILLIAMS: LOST HIGHWAY, Lucy – DRACULA. In recent years Katie and Ben have been exploring the other side of the footlights, directing and co-producing as often as possible and find they enjoy the challenge of wearing many hats.

Scott is from Litchfield, ME and holds a BFA in Music Theatre from Illinois Wesleyan University.  He is overjoyed to not only make his Portland Stage debut, but to be back on stage for the first time post-pandemic in his home state with this amazing group of musicians and friends.  A 22-year veteran of the stage, Scott made his professional debut at Maine State Music Theatre in Joseph and the Amazing Technicolor Dreamcoat and has been playing Johnny Cash for nearly 15 years.  He is most known for playing Johnny on the 1st National Tour of Million Dollar Quartet, reprising that role at MSMT, Ogunquit Playhouse, Harrah’s Las Vegas Casino and 12 other regional theatres around the nation.  Other favorite roles include Little Shop Of Horrors at the Springer Opera House (The Dentist) and The Fantasticks at ArtisTree Music Theatre Festival (El Gallo), for which he won Best Actor in a Musical from BroadwayWorld.com.  His Johnny Cash tribute album, Home Of The Blues, was recorded at Sun Studio in Memphis and is available for purchase at the box office.  Many thanks to Curt, Mical and Carol for making this possible.  This and every performance is dedicated to his parents Leonard and Donna, and his wife Sonia.  @scomoreau www.scottmoreau.com

Morgan Morse is an actor, musician, and writer originally from Connecticut. Well, originally from Maine, actually, he was born in Bangor! He’s performed Ring of Fire everywhere from Houston, TX to Vienna, Austria, and is very excited to be performing it here in Portland. Other credits include Once (Andrej) at the Ivoryton Playhouse and the Cape Playhouse, Godspell at the Ivoryton Playhouse, Hootenanny the Musicale at the Milwaukee Repertory Theater, and Southern Comfort at the Public Theater in NYC. In addition to theatre, he writes and performs original music which you can find online at soundcloud.com/morgan-morse, and during the past year, he made a TikTok account (@themorsecoda) where he now has over 83,000 followers (because life is absurd, and nothing makes sense anymore!). He’d like to thank his parents, for lots of things, but especially for letting him crash with them for a much longer period of time than anyone anticipated during the surreal experience that was 2020. And much thanks to Katie and Ben for bringing him on board, and to the whole cast and crew at Portland Stage and MSMT for continuing to make live theatre happen!