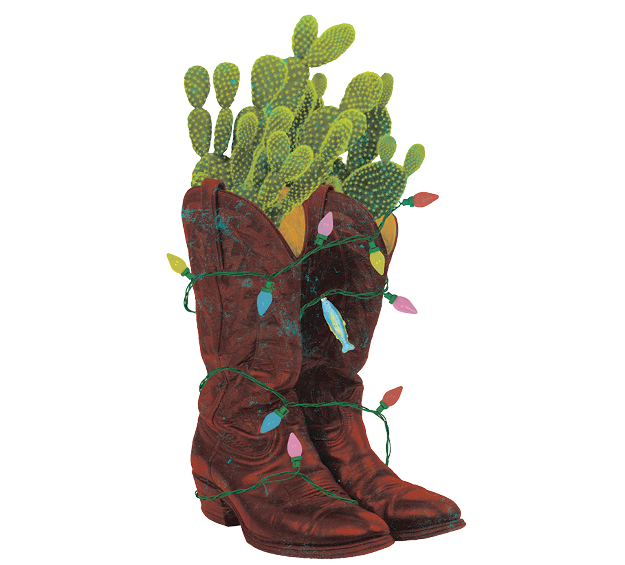 Run Time Approximate two hours and 15 minutes, including one intermission

Come on back to Tuna (the third smallest town in Texas) for the holidays!
Thurston Wheelis and Arles Struvie will keep you up to the minute with
all the local news as they follow the contentious annual lawn display
competition and try to unmask the Christmas Phantom.

The Tuna plays have always been a love letter to Texas written with a poisoned pen. Jaston Williams, Joe Sears, and Ed Howard wrote these plays in response to and reaction against the rise of the Moral Majority, a political organization associated with the Christian Right and the Republican Party founded in 1979 by Jerry Falwell, Senior. The Tuna Plays are fierce and funny satires of life in Texas and all around this country. They are brutal, and sadly, the targets that are mocked in these plays have only gotten a stronger foothold in both Texas and the United States. Like an American Chekhov– featuring flawed, sometimes truly horrible, funny human beings doing the best that they can and not succeeding.

Satire is one of the few places in our society where we can speak truth to power and laugh. From Aristophanes to Mark Twain, and Saturday Night Live to Last Week Tonight with John Oliver we delight in poking fun at the powerful and uncomfortable forces in our lives. A Tuna Christmas lives in this long tradition, and we encourage you to join us for to laugh, think, and contemplate whether Tuna, Texas of the 1990s is as far away from us as we think.

A Tuna Christmas is presented by arrangement with Concord Theatricals on behalf of Samuel French, Inc www.concordtheatrscals.com

Ed Howard, Joe Sears, and Jaston Williams • Met in Austin, Texas in 1980 through the formation of a theater company called Trans/Act, which quickly dissolved. Unemployed, Sears and Williams acted in a series of politically-inspired party skits that turned into Greater Tuna, with Howard helping finalize the script, direct, and produce the show. Since then the Tuna franchise has dominated their careers: Sears and Williams have performed Greater Tuna some 4,000 times, and the three have extended the brown’s legacy through A Tuna Christmas (1994), Red, White, and Tuna (1998), and Tuna Does Vegas (2008). However, the men’s careers also go beyond the fictional small town. Williams has had critically acclaimed performances in such shows as Larry Shue’s The Foreigner, Eugene Ionesco’s the Chairs, and Jay Presson Allen’s Tru. Sears’ Acting career encompasses musicals, dramas, Shakespeare, television, and film appearances. Ed Howard also co-authored Splendora, based on the novel by Edward Swift, and book and lyrics of the musicals The Body Snatchers and Boy Problems.

Julia Gibson is very happy to return to Portland Stage.  Last year she directed Searching for Mr. Moon, and several years ago …. Greater Tuna.  She has directed with Rattlestick, Barrow Street, Origin Theatre, ManhattanTheatreSource and Epic Theatre Company in New York City; and at Chautauqua Theatre Company, Gulfshore Playhouse, New London Barn, Juilliard, NYU Graduate Acting, SMU in Dallas, The Actors Center Conservatory, A.C.T. Conservatory in San Francisco, Stony Brook University and Stella Adler Conservatory.  She was Associate Director of the revival of Angels in America at The Signature Theatre.  As an actor she has performed on and off Broadway and at major theatres across the U.S., as well as on TV and film.  She is currently Co-Head of the Graduate Acting Program at UNC Chapel Hill where she also serves as a company member of PlayMakers Repertory Company.  She received her MFA in Acting from New York University and is a founding member of The Actors Center in New York City as well as the National Alliance for Acting Teachers; she is a Fox Fellowship recipient and has narrated over 160 audio books.  Julia recently received a Carolina Women’s Center Faculty Scholarship grant to create a theatre piece about women and aging.

Tom Ford Portland Stage: Sherlock Holmes: The Final Adventure, The Last Ship to Proxima Centauri, A Christmas Carol, Read to Me, Greater Tuna, Bach at Leipzig, The Mystery of Irma Vep, I Am My Own Wife, The Snow Queen, Iron Kisses, The Woman in Black, Lend Me a Tenor, Art, and Gaslight. Boise Contemporary Theater: The Show on the Roof (World Premiere of a New Musical, book by Tom Ford, music and lyrics by Alex Syiek), Lewiston, Tru and This Wonderful Life. Northern Stage: It’s a Wonderful Life: A Radio Play and Miss Trunchbull in Matilda. Idaho Shakespeare and Great Lakes Theater: Henry Higgins in My Fair Lady, Frollo in The Hunchback of Notre Dame, Wargrave in And Then There Were None, the Fool in King Lear, Sidney Bruhl in Deathtrap, Sweeney in Sweeney Todd, Thenardier in Les Miserables, Argan in The Imaginary Invalid, Mr. Paravicini in The Mousetrap, Baker in Into the Woods, Pseudolus in A Funny Thing Happened…, and the title role in You’re a Good Man, Charlie Brown. New London Barn Playhouse: The Odd Couple, The Man Who Came to Dinner, The Drowsy Chaperone, A Funny Thing Happened…, Hairspray, Harvey, The Pirates of Penzance, The Producers, and She Loves Me. Broadway: By Jeeves. tomfordactor.com.

Time has sharpened the satire of A Tuna Christmas, opening next week at Portland Stage – by Molly Adams, Portland Press Herald